The United States Geological Society on the history of the Pu’u’o’o eruption.  Join us on our Volcano Express Tour for an upclose look at the raw beauty of the eruption departing from either Kona or Waikoloa.

The Pu‘u‘ō‘ō eruption began in 1983, and ranks as the longest and most voluminous known outpouring of lava from Kīlauea Volcano’s East Rift Zone in more than 500 years. Lava fountains and flows have profoundly altered the landscape and repeatedly challenged residents with lava inundation. By the end of the eruption in 2018, lava flows had covered 144 km2 (55.6 mi2), erupted about 4.4 km3 (1.1 mi3) of lava, and had added 177 hectares (439 acres) of new land to Kīlauea’s southeastern shore. Lava flows also destroyed 215 structures and buried 14.3 km (8.9 mi) of highway with lava as thick as 35 m (115 ft).

Scientists divided the eruption into 61 episodes of activity, defined by the style of eruption (for example, discrete lava fountain and fissure events or persistent lava effusion) and location of the erupting vent. In the chronology below, the 61 eruptive episodes are grouped into five broad time periods.

The eruption began on January 3, 1983, as the first of several fissures broke out on Kīlauea’s East Rift Zone. By June 1983, the eruption became focused at a single vent, and over the next 3 years, a series of 44 lava fountains built a cinder-and-spatter cone later named Pu‘u‘ō‘ō. The fountains, occurring every 3 to 4 weeks and lasting about a day, fed thick ‘a‘ā flows that buried the surrounding landscape. Some of these flows reached the sparsely populated Royal Gardens subdivision, where several houses were destroyed. By 1986, tephra fallout from the fountains built the Pu‘u‘ō‘ō cone to a maximum height of 255 m (835 ft) above the pre-1983 surface.

In 1986, the eruption shifted 3 km (1.8 mi) to the northeast along Kīlauea’s East Rift Zone. This marked the end of episodic high lava fountains and the beginning of five-and-a-half years of nearly continuous effusion of pāhoehoe lava flows from the new vent. A lava pond formed above the vent, and frequent overflows built a broad, low shield, later named Kupaianaha, to a height of 56 m (180 ft) in less than a year. Lava first reached the ocean on November 28, 1986, after cutting through the coastal community of Kapa‘ahu and covering a section of Highway 130 (within Hawai‘i Volcanoes National Park, the highway is named Chain of Craters road).

The eruption entered its most destructive period in March 1990, when breakouts from a lava tube progressively entered the Kalapana community, an area cherished for historic sites and black sand beaches. By the end of the year, the entire community, including a church, store, and 100 homes, was buried beneath 15-25 m (50-80 ft) of lava. In late 1990, a new lava tube finally diverted lava away from Kalapana and back into Hawai‘i Volcanoes National Park.

The volume of lava erupted from Kupaianaha steadily declined through 1991 as lava activity in Pu‘u‘ō‘ō’s crater increased. As new fissures erupted between Pu‘u‘ō‘ō and Kupaianaha for about 3 weeks in November, lava output from Kupaianaha continued to decline until it stopped on February 7, 1992.

Ten days after Kupaianaha stopped erupting, activity returned to Pu‘u‘ō‘ō. Lava then erupted from a fissure on Pu‘u‘ō‘ō’s west flank, the first of many flank vents that soon built a broad shield 130 m (425 ft) tall on the southwest side of the cone. The nearly continuous, quiet effusion of pāhoehoe lavafrom different flank vents over the next 15 years substantially widened the existing flow field and sent flows into the ocean most of the time. The ocean entries built a series of lava deltas on Kīlauea’s southeast coast, which, combined with earlier ocean entries, added a total of about 169 ha (418 acres) of new land to Hawai‘i.

During this time, the massive Pu‘u‘ō‘ō cone experienced many collapses that enlarged the crater, lowered the crater rim, and formed many small pits and craters on the flanks of the cone. The largest collapse occurred on the night of January 30, 1997, when the magma conduit between the summit and Pu‘u‘ō‘ō ruptured, cutting off the supply of magma to the eruption. The lava lake in Pu‘u‘ō‘ō drained, the crater floor dropped about 150 m (500 ft), and a large gap appeared in the west side of the cone. Shortly thereafter, new fissures broke open and erupted briefly in and near Nāpau Crater about 4 km uprift of Pu‘u‘ō‘ō. The entire event was over in 24 hours.

Lava erupted again in the Pu‘u‘ō‘ō crater on February 24, 1997, and within a month, lavaerupted outside the crater from new vents on the west and southwest flanks of the cone. For the next 10 years, lava variously appeared in Pu‘u‘ō‘ō, sometimes overflowing its crater rim, and erupted from new flank vents for several months to a few years at a time. Commonly, a series of rootless shields formed along the lava tube systems, some of which merged to build a broad ridge 2 km (1.2 mi) long in the middle of the flow field.

On June 17, 2007, an intrusion of magmainto Kīlauea’s upper East Rift Zone depressurized the magma reservoir beneath Pu‘u‘ō‘ō. As a result, the floor of Pu‘u‘ō‘ō collapsed to form a rubble-filled crater about 80 m (260 ft) deep, which severed the supply of lava to a tube that had been active since 2004. The intrusion culminated on June 19 with a brief eruption on the east flank of Kāne Nui O Hamo, a lava shield northwest of Pu‘u‘ō‘ō. A 12-day pause in the eruption followed.

Lava reappeared in Pu‘u‘ō‘ō on July 1, 2007 and came to within 30 m (100 ft) of filling the crater when, on July 21, new fissures erupted on the northeast flank of the cone and extended downrift nearly 3 km (1.9 mi) to the base of Kupaianaha. Activity soon focused over a single fissure and produced a series of ‘a‘ā flows that reached as far as 6 km (4 mi) to the northeast. Because of growing concern that these flows could reach downslope communities, HVO scientists prepared a new hazard assessment for the eruption. The lava channel feeding the flows overflowed its banks, and eventually built a perched channel as high as 45 m (150 ft) above the surrounding flow field. In late November, a new breakout from the fissure soon diverted all of the lava to the southeast and into the ocean near Kalapana from March 2008 through early 2011. Between July 2010 and January 2011, breakouts from the coastal plain tube system destroyed three houses that had been built on the earlier Kalapana flows .

After nearly three years of little activity within Pu‘u‘ō‘ō, lava began erupting in the Pu‘u‘ō‘ō crater in May-June 2010. By early March 2011, lava had filled the crater to within about 20 m (65 ft) of its northeast rim. This filling and other evidence indicated that the magma system extending from Kīlauea’s summit reservoir to Pu‘u‘ō‘ō was increasingly pressurized. On March 5, a new intrusion and eruption, known as the Kamoamoa fissure eruption, began uprift from Pu‘u‘ō‘ō. This eruption lasted five days.

Following the Kamoamoa fissure eruption, lava repeatedly erupted within the crater and from the flanks of Pu‘u‘ō‘ō. Lava reappeared in the crater on March 26, 2011, and a perched lava lake quickly grew as the crater refilled. On August 3, 2011, the crater floor suddenly collapsed as lava burst through the west flank of the Pu‘u‘ō‘ō cone. A massive flood of lava spread rapidly, splitting into two branches—a short northwest branch that stopped the next day and a south branch that reached 3.5 km (2.2 mi) before becoming inactive on August 15.

Lava reappeared in Pu‘u‘ō‘ō within days of the August 3 breakout, and the crater again filled unusually fast. By September 10, lava overflowed both the northeast and southwest rims of the crater. Lava stopped filling the crater on September 21, when a new fissure erupted high on the northeast flank of Pu‘u‘ō‘ō. This fissure sent a flow—the “Peace Day flow,” informally named after the United Nations Peace Day holiday—toward Kīlauea’s southeast coast once again. The flow briefly entered the ocean in December 2011, and subsequent breakouts entered the sea between November 2012 and August 2013.

After more than a year of relatively weak activity in Pu‘u‘ō‘ō’s crater and on the flow field, activity in the crater increased in January 2013. On January 19, lava spilled from a lava pond that had built a small shield above the north crater rim, spreading flows down Pu‘u‘ō‘ō’s northeast flank as far as 8 km (5 mi). These lava flows were called the Kahauale‘a 1 and 2 flows. In early November 2013, the barely active Peace Day flow stopped as the vent high on the northeast flank of Pu‘u‘ō‘ō became inactive.

New fissures erupted on the east flank of Pu‘u‘ō‘ō on June 27, 2014. These fissures led to the shutdown of the Kahauale‘a flows and the start of a new lava flow that rapidly advanced to the east. Known as the June 27th flow, it advanced 20 km (12 mi) toward the community of Pāhoa between July and late October 2014. This flow nearly reached Highway 130, which is the only transit route for nearly 10,000 people living in the lower Puna District. In November 2014, the flow front began to advance again in a slightly different direction, and by mid-December 2014, was threatening the Pahoa Marketplace. But, once more, the flow front stagnated and the Marketplace was not damaged. The June 27th flow activity then retreated completely to within about 6 km (4 mi) of Pu‘u‘ō‘ō in late March 2015, where it remained for the rest of the year.

On April 30, 2018, Pu‘u‘ō‘ō’s crater floor and lava lake catastrophically collapsed and the eruption ended. More information about the end of this eruption can be read in the January 31, 2019 issue of Volcano Watch. 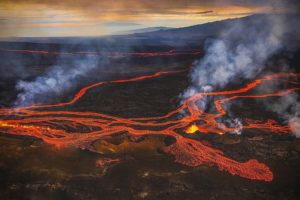 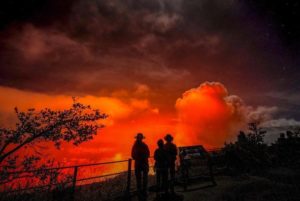 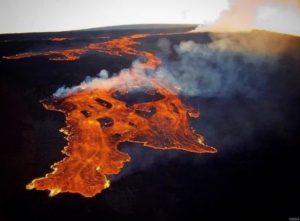 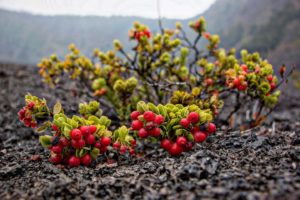